We are your one stop shop for all exclusive Rifleman/Ellay Khule music and LA Streetz/Cali Classics merchandise including Men's and Women's items, kids items, and more.

Greetings Hip-Hop community. If you are unaware of the unfortunate event that legendary emcee, ELLAY KHULE aka Rifleman went through recently, below is a summary for your perusal. In the early morning of July 23 rd , returning from a show at approximately 2am, he dropped of one of his homies when a car got behind his car, driving erratically. Thinking they were in a rush based on the speed they were driving, he hit a corner to let them pass. They followed and pulled up to his car yelled out a gang and shot six times as he pulled up to a red light. There was no previous altercation or confrontation what so ever, it was unprovoked. Unfortunately, he was struck twice which resulted in 3 wounds including the back, chest and neck. The result has been multiple surgeries, ongoing health complications. A full recovery will be measured in time.

Recently the underground Los Angeles community came together to do a benefit show for him which was a tremendous success. The evening was well attended and one of the highlights of the evening other than the touching performances and memories made were custom gift bags consisting of a multitude of hard to find CD’s, apparel and artwork from some of So Cal’s most iconic Artists. With such an amazing outpouring of merchandise from these talented artists, we would like to make some of these items available online to those who couldn’t attend the benefit show and are not in the area. In addition, there is also a "name your price" silent auction to the highest bidder. ELLAY KHULE's team and family would like to extend their sincere appreciation for the overwhelming amount of love and support that the fans and industry have given during this difficult time Be on the lookout for his new project Speech Therapy. Please continue your love and support! - TEAM RIFLEMANIA

Rifleman aka Ellay Khule, a vet in this HipHop game, is still a factor after 20 straight years of hard work. Originating from the GoodLife, this Project Blowed emcee has released over 20 solo projects and made a multitude of guest appearances / group projects. Being a member of the group Hip Hop Klcan with sibling Dj Troo and cousin Pterradacto, they have rocked some of the biggest crowds and created some of the most eccentric and influential songs in LA underground history. Together, they have three group LP’s.

As the founding member the group, Goodlife Bullyz, with Mister CR, Kazue, Volume 10 and Konvick Rick (RIP), they have 3 groups LP’s as well.

Rifleman who now produces music also launched his own music and apparel company, Cali Classics, which is on the rise as a fashion and lifestyle brand. With the talent to mix and master his own tracks and produce and direct music videos, Ellay Khule is now working on a few short films and more. Having recently graduated from LA FILM SCHOOL and his real-life industry experience, be on the lookout … the sky is the limit.

Upcoming projects include: a webisode "Tell It Like It Is", a new single, a new Goodlife Bullyz project, Black Velvet release and collaboration with DJ Mark Luv.

SHIPPING IN THE U.S. 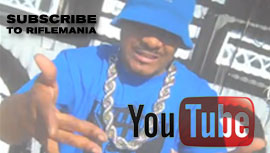